The code for this lab was something I was playing with to display on a Nintendo DS. It uses the mux window manager and the prefab module builtin. Because of the dependency on the builtin, which isn't usually part of the inferno-os standard emu build, I've included a muxemu.exe for Windows in this labs code. To launch the code run the following,

and on the screen you should see this, Move up and down using keys 'i' and 'm'. Enter a selection using the 'Enter' key and return to the main menu by pressing the spacebar.

I'm not experienced with the draw(2) API so I started with screens for board games. I was experimenting using transparency effects. The look I was going for was Electroplankton for Nintendo DS. 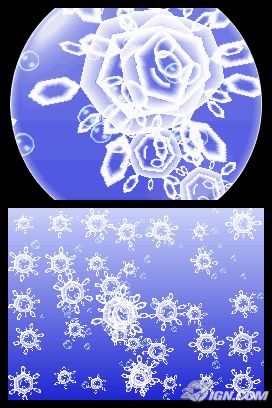 I tried to get shapes with edges that blended out into a graded background and some simple animations of shapes pulsing. The one serious application I was trying to write was a QUONG keyboard for convenient touch input. This application responds to the mouse to enter letters. The top half of the windows is an implementation of Plan 9's libframe. It was part of Inferno's acme implementation and I extracted it from acme's dependencies. If you take anything away from this lab it would probably be this one library, maybe to build an inferno based 9term.

A big disappointment is that these didn't actually work on the inferno-ds due to what I guess is a bug in the handling of graphics with masks. They did seem to work on the DS emulators, but slowly. Another difficulty is writing them so that they fit in the DS memory, the techniques of which I'm completely ignorant because I'm used to the great spaciousness of modern desktops.

By caerwyn January 09, 2006
NAME lab 51 - plumbing from firefox NOTES I often want to copy and paste text from the firefox browser into my Acme session. Copy and paste isn't implemented for hosted Inferno. It could be implemented easily enough, but not in a general way for all hosted environments, and there might be more interesting ideas to explore especially when including plumber in the mix. To solve my particular problem, getting text from the browser to Acme, I created a bookmarklet that opens a window on a URL that I serve from my Inferno session. The URL http://localhost/magic/plumb is a shell script that calls the plumb command to open the query string in Acme. plumb -d edit -a action showdata -a filename /httpd/plumb $"msg >[2=1] I have a modified httpd that calls shell scripts and sets environment variables to the cgi data from the query string. In this case msg is a query parameter. I install a plumb bookmarket (drag it to toolbar), then I can select text in Firefox, click on t
Read more